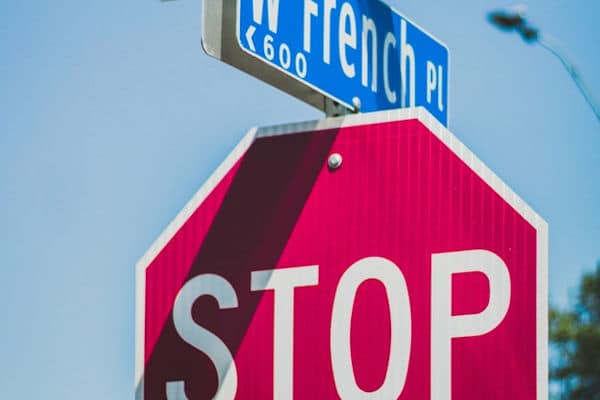 These accidents happen for many reasons. For instance, a person stopping at a stop sign may be rear-ended by a distracted driver, or one who is following too closely, driving too fast, or experiences some unexpected event like a brake failure or hitting a patch of ice. Or, a driver may blow through the stop sign, either because he wasn’t paying attention or intentionally. These types of accidents can occur anywhere there’s a stop sign, whether it’s a single sign, a two-way stop, or an all-way stop.

One issue specific to four-way stops is a lack of clarity. Most people learn in their driver’s education courses that the first person at a four-way stop has the right of way. But, that language itself may be a bit misleading. What the Massachusetts Rules of the Road actually say is that the first person to come to a full stop has the right of way.

Of course, you may not be certain who arrived first when you get to a four-way stop. And, you and another driver may be judging by different standards–first to arrive or first to come to a full stop. Perhaps you’ve been involved in the dance where you aren’t sure, hang back and wait for the other driver to go, then start to move forward just as the other driver also belatedly starts to move forward, only to both stop again…

If you arrive at the stop sign at the same time, the person to the right has the right of way. But, not everyone seems aware of that rule. And, a surprising number of U.S. adults have trouble quickly determining left from right. In one survey, 19.5% of college professors and 26.2% of college students said they sometimes or always got left and right confused when required to assess quickly.

Traffic safety experts say there are 32 points of potential conflict in a four-way intersection. And, that’s only counting the potential danger points involving two motor vehicles. When you throw pedestrians and bicyclists into the mix, that number increases to 56.

In other words, there’s a lot that can go wrong at a four-way stop. And, that’s not even taking into account the drivers who try to cheat a little, rolling the stop sign to pass through the intersection out of turn or piggybacking on someone else’s turn if you’re in parallel lanes.

Four-way stop accidents have one thing in common with other types of traffic crashes: most could be avoided. While there are risks surrounding four-way intersections generally and four-way stops specifically, observing traffic laws and exercising care minimizes those risks and could prevent most collisions.

For example, the risks are aggravated by:

If you’ve been injured in a four-way stop accident or other traffic accident because someone else was negligent, you owe it to yourself to learn more about your rights and options. You may be entitled to compensation for losses such as medical expenses, lost income, and damage to your vehicle. You may even be able to recover compensation for intangible losses like pain and suffering.

Attorney Kevin P. Broderick knows how stressful and confusing the aftermath of a serious injury can be, and wants to ensure that you have the information you need to make good decisions for your future. That’s why the initial consultation is always free and there’s never a fee unless and until we recover compensation for you.