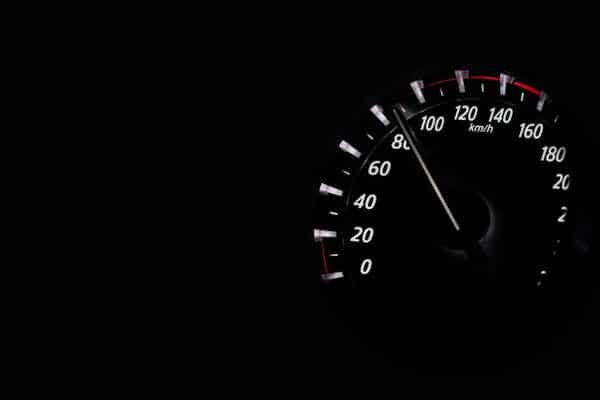 Many people exceed the speed limit, at least slightly, on a regular basis. 45% of respondents to a recent survey said they almost always exceeded the speed limit. While most of those drivers said they usually stayed 5-10 miles per hour over the limit, about one in six regular speeders said they drove 11 miles per hour or more above the limit. Common rationalizations for speeding include a perception that everyone else does it, a belief that speed limits are too low, and simply being in a hurry.

Though most people realize that excessive speed can cause car accidents, you may not realize how significant a role speed plays. According to data from the National Highway Traffic Safety Administration (NHTSA), between ¼ and ⅓ of all fatal motor vehicle accidents involve excessive speed.

In fact, speed increases risks for drivers, passengers, and others sharing their space even when speed limits are observed. The Insurance Institute for Highway Safety (IIHS) determined that between 2003 and 2017, rising speed limits around the country were responsible for about 37,000 additional traffic fatalities.

Here are just a few of the reasons that exceedingly speed limits or driving too fast for conditions makes driving more dangerous:

In other words, the fact that speeding is common doesn’t make it safe. And, it doesn’t mean speeding drivers get a free pass when they cause injury or death.

In some states, violation of a traffic safety statute is considered “negligence per se.” In simple terms, that means that a person who exceeds the speed limit, runs a red light, or otherwise violates traffic laws and causes an accident can be found negligent purely on the basis of that violation.

Massachusetts does not recognize negligence per se in the context of traffic laws. However, Massachusetts courts will consider evidence that a driver was exceeding the speed limit or violating another traffic safety law when determining whether the driver was negligent. Traffic speed laws are written with safety in mind, uniformity plays an important role in traffic safety, and there is ample evidence that higher rates of speed increase both risk and the degree of harm a traffic crash causes. So, it’s common for a driver who was speeding to be deemed at least partially responsible for a traffic accident.

It’s important to know, however, that multiple factors may combine to cause an accident. In some cases, that may mean that two or more parties share responsibility for the accident. For example, if one driver was distracted and the other was speeding, it’s possible that a jury would determine that both were negligent, and each was partially responsible. Depending on the degree of responsibility assigned to each, a person who was partly responsible for his or her own accident may still be able to recover partial damages.

If this is starting to sound complicated, don’t worry. An experienced car accident attorney can explain how these concepts may apply in your specific circumstances.

Attorney Kevin P. Broderick knows that the last thing you need when you’ve suffered a serious injury or lost a loved one is the added stress of uncertainty. That’s why he offers free consultations to injury victims in Massachusetts and New Hampshire. Schedule yours right now to learn more about your rights and options. There’s never a fee unless and until we recover damages for you.