E-scooters can offer significant benefits to communities and the planet. For example, they can reduce traffic congestion, reduce the greenhouse gasses released by traditional motor vehicles, and provide access to transportation for people who are not near public transportation stops.

Scooter sharing programs such as Byrd and Lime make it possible to take advantage of the convenience and environmental benefits of e-scooters without investing in purchasing a vehicle. This makes the e-scooter option more attractive for students, lower income populations, and occasional users. While these sharing programs have grown in popularity in areas of year-round warmer climates, like California and Texas, Brookline is the first Massachusetts community to pilot such a program.

The Brookline scooter sharing program kicked off on April 1st to significant publicity and a fair amount of controversy. The ceremonial test run resulted in one woman being transported to a local hospital by ambulance. The incident didn’t involve a collision: rather, the rider simply lost her balance and the scooter tipped over. The limited data available suggests that such falls are among the most common types of e-scooter-related injuries. 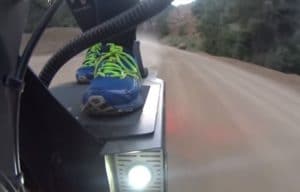 The Brookline, Massachusetts e-scooter sharing program launched just over a month ago, so there isn’t a lot of available data about the risks and injuries locally. In fact, there is little reliable data available on a nationwide level. However, there have been at least two studies that sampled emergency department records to determine the frequency and nature of e-scooter injuries.

One of those studies was conducted by researchers at the University of California at Los Angeles (UCLA). These researchers collected data from two hospital emergency departments, spanning one year. The two departments together reported a total of 249 e-scooter-related injuries treated in their emergency rooms in a one year. E-scooter supporters rightly point out that this number is far smaller than the number of people treated for motor vehicle accidents involving cars, trucks, and motorcycles. However, e-scooter use is not nearly as widespread as those other types of vehicles, and 249 injuries requiring treatment in a hospital emergency room is not negligible.  A separate study conducted by the Portland bureau of Transportation concluded that the injury rate associated with e-scooters was much higher than that associated with either cars or motorcycles.

The UCLA researchers reported that falls were the most common type of injury, while about 10% involved collisions with objects. Unsurprisingly, given the type of accidents occurring, scooter riders suffered most of the injuries treated in emergency rooms. However, 8% of those injured were pedestrians – – about 20 people between these two emergency rooms.

While some e-scooter injuries involved only cuts, sprains and bruises, 40% of the injuries reported in the UCLA study were head traumas. Another 32% were broken bones.

In response to a larger investigation conducted by Consumer Reports, 23 medical facilities reported treating a total of 1,545 patients for e-scooter related injuries. This same report concluded that there had been at least four e-scooter-fatalities.

In some ways, liability issues relating to e-scooter injuries are very similar to those relating to car accidents and other traditional motor vehicle accidents. For example, A rider who causes an injury to a pedestrian, a bicyclist, or another rider through his or her own negligence will typically be responsible for damages. However, collecting those damages may be more difficult, in that an e-scooter rider is not currently required to carry liability insurance like the driver of an automobile its. While many riders may assume that their automobile insurance policy would cover an accident occurring while riding an e-scooter, most automobile insurance policies exclude two and three-wheeled vehicles.

Coverage provided by the e-scooter sharing company varies not only by company, but also based on state and local licensing requirements.

Greater complications arise when the scooter rider is the injured party. Most e-scooter rental companies include liability waivers, agreements to indemnify the company, and other protections for the e-scooter provider in their user agreements. That means it may be difficult for an e-scooter user to hold the company responsible after an accident. However, there are circumstances under which the company may still be liable. For example, if the company puts faulty vehicles on the road, or negligently maintains them, it may be possible to pursue a claim despite the user agreement waiver.

Therefore, if you have been injured while riding a rented e-scooter, do not assume that the waiver in the user agreement will prevent you from pursuing damages. A conversation with an experienced local personal injury attorney like Kevin J. Broderick can be the best way to assess legal responsibility and whether you may be entitled to compensation for your injuries.

If you or a loved one is in need of a personal injury attorney in Massachusetts or New Hampshire, just call The Broderick Law Firm, LLC at 978-459-3085 or fill out this contact form to schedule a free consultation.